Today’s Top Ten Tuesday from the Broke and the Bookish is “Top ten characters I’d never want to trade places with”. I often imagine myself as characters in the books I read, so it’s interesting to see who I wouldn’t want to be.

1. Katniss Everdeen from The Hunger Games

It’s kind of obvious why. First, she lives in a world where the hunger games exist, then she has to participate. People die, people try to kill her. Sure, she’s a hero, but not because she wanted to be.

2. Lisbeth from The girl with the dragon tattoo

I didn’t like that book, and I didn’t read the others in the trilogy. Lisbeth’s been controlled and abused her whole life. She’s not happy. Maybe she becomes happy in the later books. If you’ve read them, let me know how it turns out for her.

She’s a star, sure, that’s cool. But she falls from the sky and can’t go back. Plus, she doesn’t eat. I know all she needs is light, but as a mere mortal, I can’t imagine a life without cake.

4. Anyone from a Jodi Picoult novel

I enjoy her books, but they’re always centered around a problem. A big one. Everyone’s life is messed up, they go to court, they blame each other. No thanks.

5. Becky from Confessions of a Shopoholic

She loves to shop. I actually do to, but I get stressed out if my phone bill is late or if I owe someone 10$. I’d love to have as much nice clothes as her, but the credit card debt? Forget it.

6. Liesel in The Book Thief

It’s Germany, during World War 2. She loses her brother and her mother within hours of each other. Death is obsessed with her. Her adoptive family loves her, but her life is hard and sad.

7. Ayla from The Clan of the Cave Bears

She loses her people when she’s too young to realize it. She’s raised by people who are different, and who never fully accept her. She is cast out, has boy trouble and lives during the ice age, no it’s no picnic.

If you haven’t read this book, spoiler alert. Beth is sweet and all, but she’s boring and dull. Then she dies. Yeah, not cool.

9. The women in The Dovekeepers

These are strong, independent women, which is rare for biblical times. However, such independence comes at a price. I’m impressed by them, but I would not want to be them.

Sure, Sookie is part fairy, she like vampire crack and they all love her. Eric is hot, Bill is handsome, and then there’s Sam, the warm-blooded shape shifter who also loves her. But people are always trying to kill her. She can read people’s minds and it drives her crazy. (I know True blood is the name of the tv show, not the books!)

When I did my yoga teacher training last July, I learned the importance of having a home practice. Sure, it’s great to take classes, but it’s also good to have your own, self-guided practice. I didn’t have a special space dedicated to yoga, so I decided to create one in my spare bedroom.

My neighbours moved out, new neighbours moved in, and this fantastic, old, wooden, cabinet was left outside. I thought it was just being left out while the moving was getting done, but then I realized it had been out there for weeks, it had been rained on, and basically forgotten. I asked them what they planned to do with it, and they said “We don’t want it, it was left here, we’ll just throw it out.” My heart stopped for a second, thinking that this beautiful piece would end up in the trash. I asked if I could have it and they gladly gave it to me and helped me move it up to the third floor. Lovely people!

It needed a lot of love. Parts of it were painted, parts of it were stained. The wood had swelled from the rain, the doors didn’t close, pieces had fallen off. It’s a good thing I was planning on saving it.

I took the doors off and brought them to my dad. He fixed the broken mesh screen and sanded down the bottom of the doors so they would close again.

I learned how to use wood glue and clamps to try and get it back to it’s original shape. I used plastic wood. I cleaned and sanded it. And then I cleaned it again. There was a lot of dirt and a few bugs too. 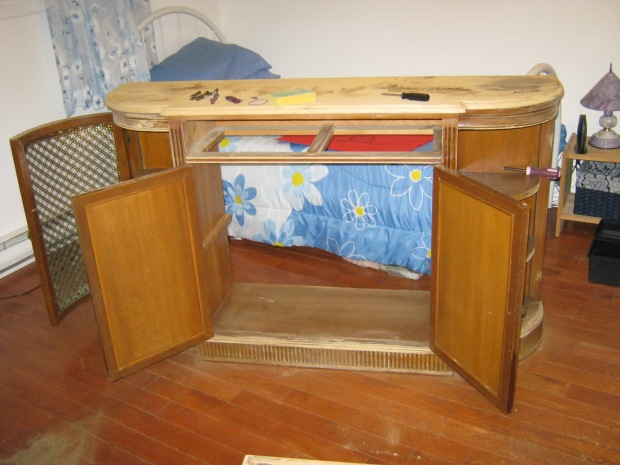 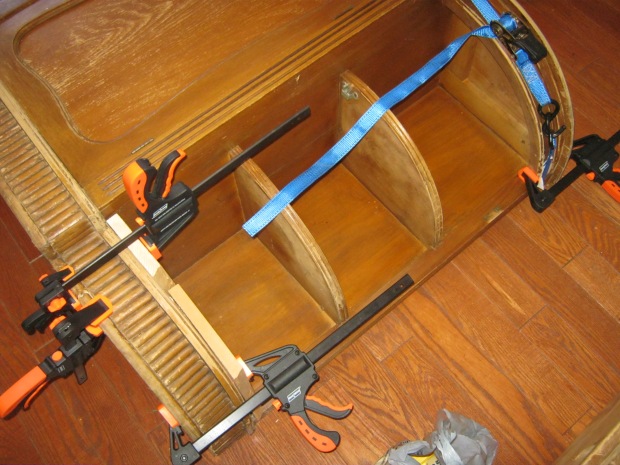 My mama came over for a few days to help me pretty it up. She brought the doors my dad had fixed and she had painted. We primed the whole piece with an oil-based primer, then hit it with three coats of sunshine. 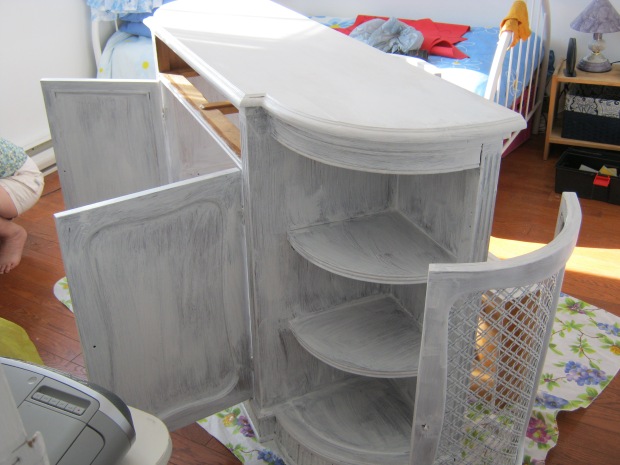 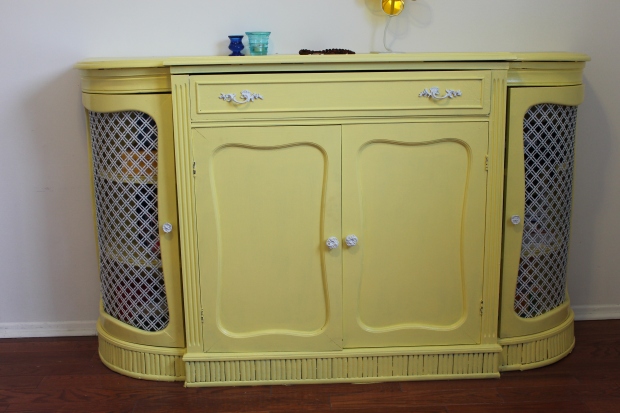 I also wanted a wall of picture frames. Different shapes and sizes, but all the same colour. I had a few already, then bought a couple more at a thrift store and one at a decorating store. I set them out on the floor to see what it would look like on the wall. I ended up returning the circular one in the top left corner and replacing it with a lace-like frame instead.

I tried to just spray paint the frames, but it wasn’t sticking, so I primed them using the same oil-based primer I used for the cabinet. It worked really well. 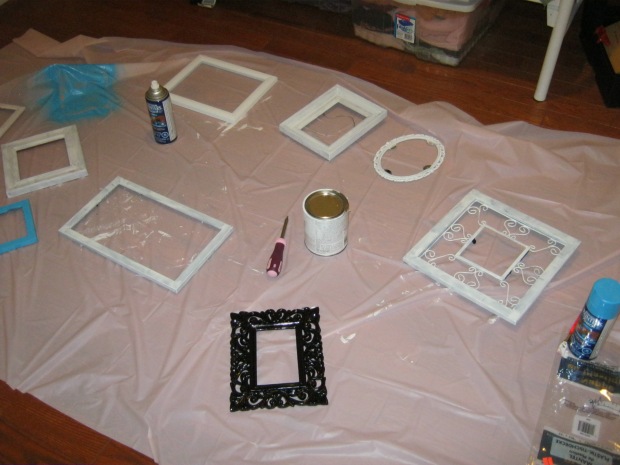 I spray painted the frames indoors, as I live in an apartment and don’t have a yard, but I would recommend doing it outside if you can. It gets pretty stinky. Thankfully, it was summer, so I had all the windows and doors open.

Then, I pulled everything together to create a beautiful, peaceful, zen yoga space. I love it! 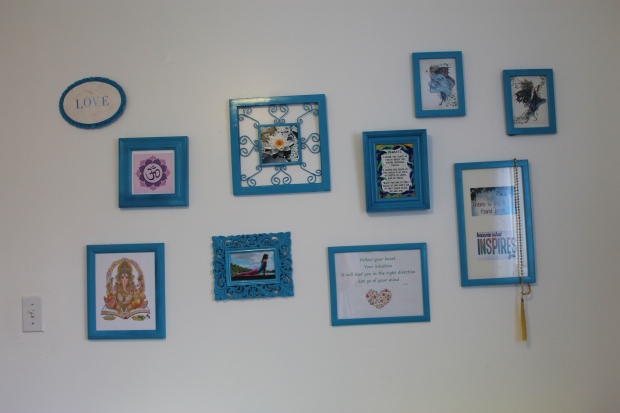 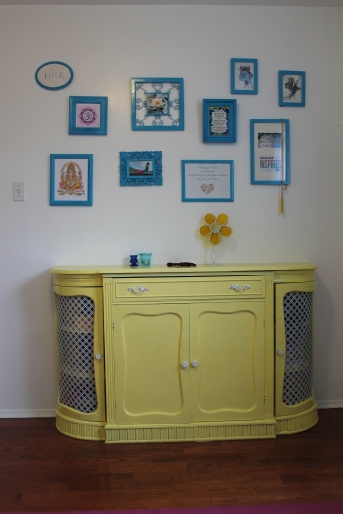 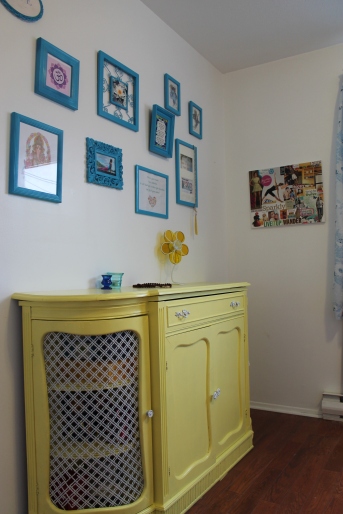 It all came together beautifully. It was a lot of work, but it was worth it. I now have a place to practice whenever I feel like it. It definitely helps to have a designated yoga space if you want to build a home practice. Lately, it’s been mostly used for yin-type yoga, but I also use the space when I plan out the classes I teach. Now, if you’ll excuse me, my mat is calling to me!

I haven’t been blogging very much lately, and I’m not sure why. I still love to write. When I do fun stuff (aerial yoga, anyone?) I think “I’ll totally blog about this!” And then, for some reason, I don’t. I’m not about to stress over this and try to analyse it. My blog is, as I’ve said before, my happy place.

So, although this seems a little late, I’ve put together my happy moments for November. In 2014, I am going to try to recap the great moments of every month, because looking back at what made me happy over the course of the month makes me happy all over again, and happy twice is better than happy once!

Christmas crafting with my best friend!

Finding homes for my teacups and teapots. I love the mix of tea and books! 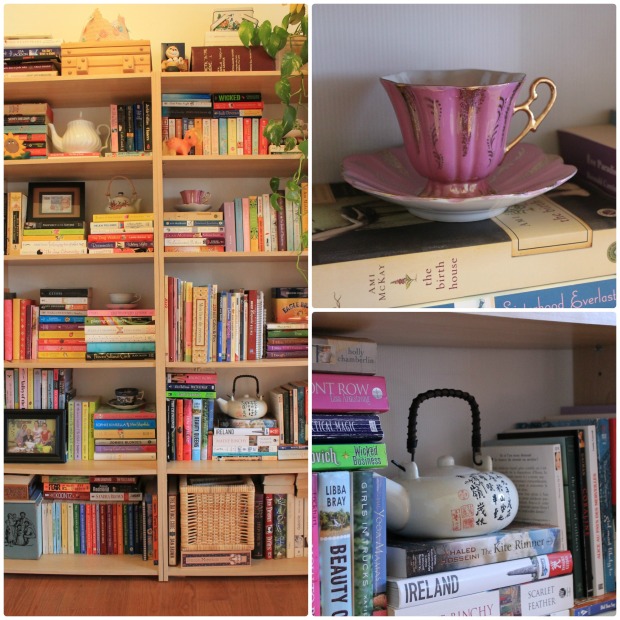 Displaying my love of tea for all to see! I stained these wooden letters with tea (of course!) and put them in my kitchen window. 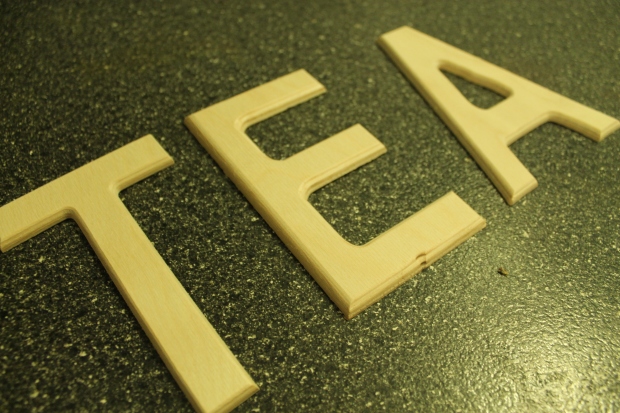 My birthday is in November, therefore it is the best month of the year.

Messages from my students on the board in the classroom. I was not allowed to erase them (not that I wanted too!) so I taught using pieces of paper all day. It was worth it!

This was the snack table for my party. Yay, cupcakes! More food was added to this later.

I had a vision board party. We looked at many, many magazines, pulling out any and everything that caught our attention.

We made a mess, but it was fun!

The finished products were fantastic! They are all very different and represent what we want to happen in our lives.

Sadly, many magazines were harmed in the making of these vision boards. However, it was for a good cause and they were just going to be recycled anyways!

The day after my birthday, there was a huge snowstorm. It was the first snow of the year and it was fabulous! We got about 30cm (I think) and it was perfect snowman snow, the kind that sticks. Since we knew the kids at school would be too excited to sit down and work, we decided to have a special, one hour recess first thing in the morning. Everyone was happy, kids and teachers alike! 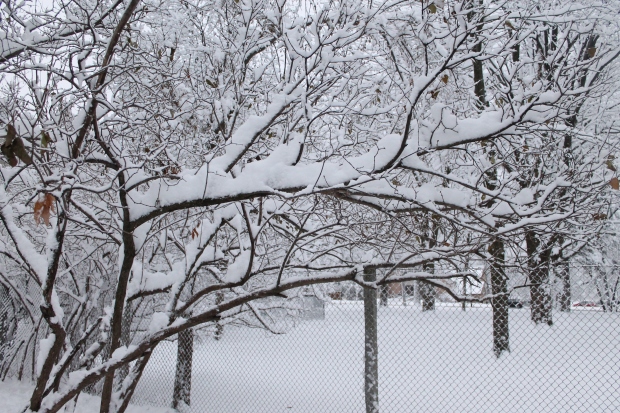 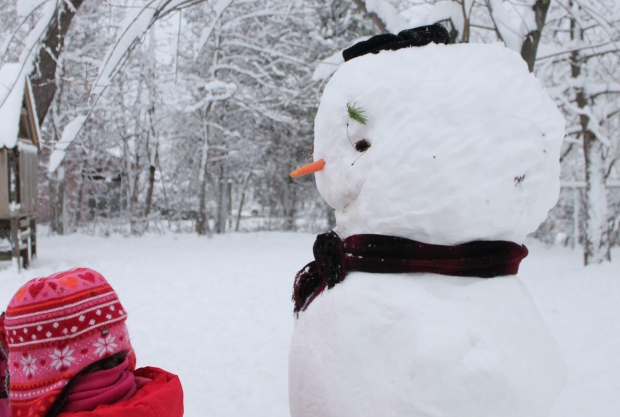 I’ve actually enjoyed going through all these moments that happened over a month ago. Maybe I am meant to do these monthly recaps long after they’ve happened!

Now that it’s January, I haven’t been wearing dresses every day, as Dressember is over! As much as I enjoy wearing a dress every day, it was nice to have a little break, because it was so, so cold!

Here is the rest of my December in dresses.

I love this dress, but I don’t wear it very often, because it’s not a great colour for me. Maybe I should wear it more in the summertime, when I look a little less pale.

I believe it was snowing and I wasn’t going anywhere, so I opted for a comfortable sweater dress and leggings. Dress is from Old Navy.

I changed the colour of my hair. I love my hair dark. I wanted a picture outside, but it was cold! 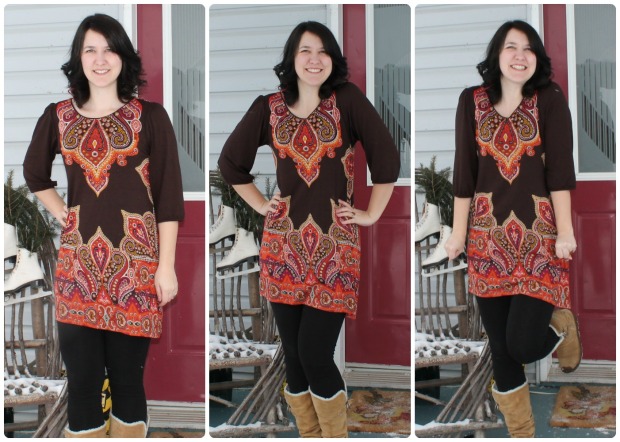 I had ordered a dress from Modcloth specially for Christmas eve, but it still hasn’t come! Thankfully, I had a lovely back-up dress! 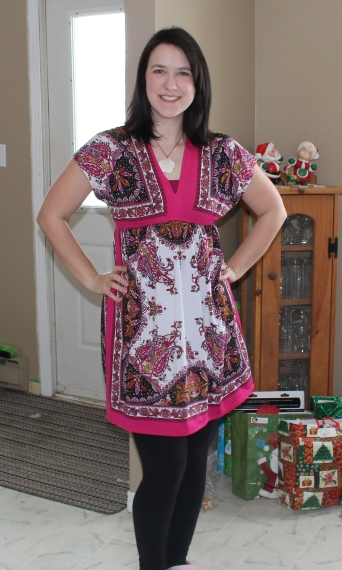 Enjoying my time off, being all comfy in my slippers! 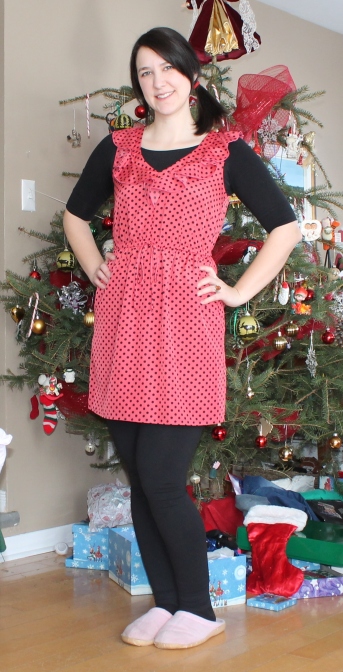 This dress is basically a very long sweatshirt. It’s like wearing pajamas all day!

A book and lattes kind of day.

I’m almost out of days in December, but not out of dresses! 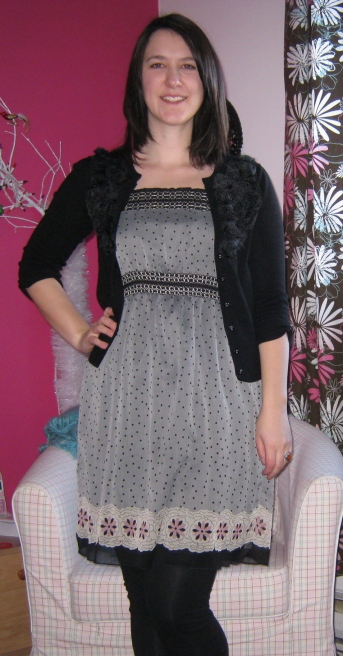 And here is a look at all of my dresses for the month. 32 dresses in 31 days! Until next year!