You know when you do something awesome, totally without even realizing it? Well, this isn’t exactly one of those stories, but sort of.

On Sunday, I was trying to make up for the rest of the weekend’s indulgences by throwing some chicken in the slow cooker before I left to spend the afternoon with my friend Suzanne. I was thinking I would come home and have some nice healthy chicken. Well, what really happened was that I ate at a pub and then at Dairy Queen, so when I got home, I wanted nothing to do with that chicken, even though it smelled delicious!

I needed something for my lunch the next day, so I cubed the now cooled chicken, cooked some quinoa and bulgar, and tossed it all together with the broth from the crock pot. Wow! A-ma-zing.

I had tossed some garlic gloves in the slow cooker with the chicken, and they turned green. According to Google, this is because of the acid in the lemon juice. 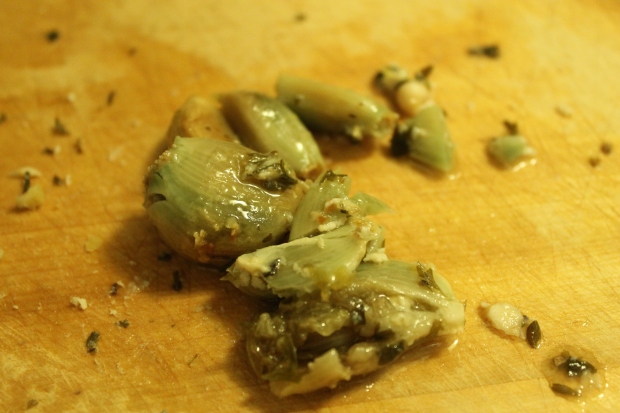 For a salad that happened by accident, it could not have been more delicious! I’ve had it cold and warmed up, and both were delicious. Enjoy!

– juice and zest from 1 lemon

– salt and pepper to taste

Cook until chicken is done, then cool and cube. Toss with quinoa, bulgar and broth from the crockpot. I would have added nuts to this, but I was going to eat it at school, and some kids have allergies.