Last year, in December, I took part in Dressember. It’s a fantastic, amazing, fun, challenge where one wears a dress every day in December. It was my first year participating, but I found a great online community of Dressemberites who made it even more fun! Some of the people have been doing it for a few years.

This year, however, there was a twist in the December world. The person who started the challenge in 2009 decided to align Dressember with a charity. She chose the International Justice mission, which is great. What’s not great is that someone is claiming ownership of a word, a challenge, and a community. Our old Dressember facebook page was deleted and we had to change the name of our group. Lots of people donate and fundraise, but for various causes.

Even though I’m apparently not supposed to use the word anymore, it’s still Dressember to me!

Day 2 – On Mondays we wear purple! (Some days have themes or colours. It’s just for fun, you don’t have to do it.)

Day 3 – Max Studio dress. These dresses always fit me and look awesome, so I have to be sure I’m ready to buy before I try!

Day 4 – On Wednesdays we wear pink! Hand me down dress from my mama.

Day 5 – Hardtail leggings (my favourite) and dress from a friend who bought it, then decided she didn’t like it.

Day 6 – BeBop dress. One of my favourites. I bought it in the summer, and thought I’d have to put it away for winter, but it “winterizes” very nicely.

Day 7 – Purple silk party dress from Kensie. From a friend who didn’t want it anymore. Lucky me! 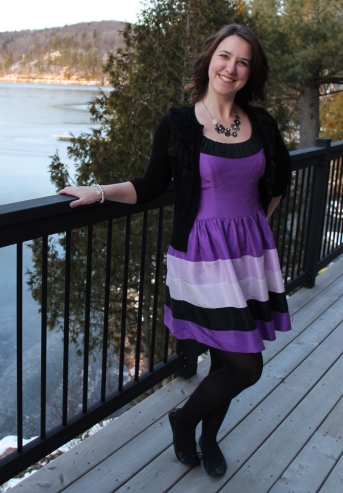 It’s not too late to join in the fun!

I have a lot of blue books. Really, I have a lot of books, but it seems like a lot of them are blue. I put them all together and it made me wonder, are blue books sad? Now, I regularly ask myself silly (or brilliant, depending on how you look at it) questions like this, but I rarely find an answer. Shocking, I know. 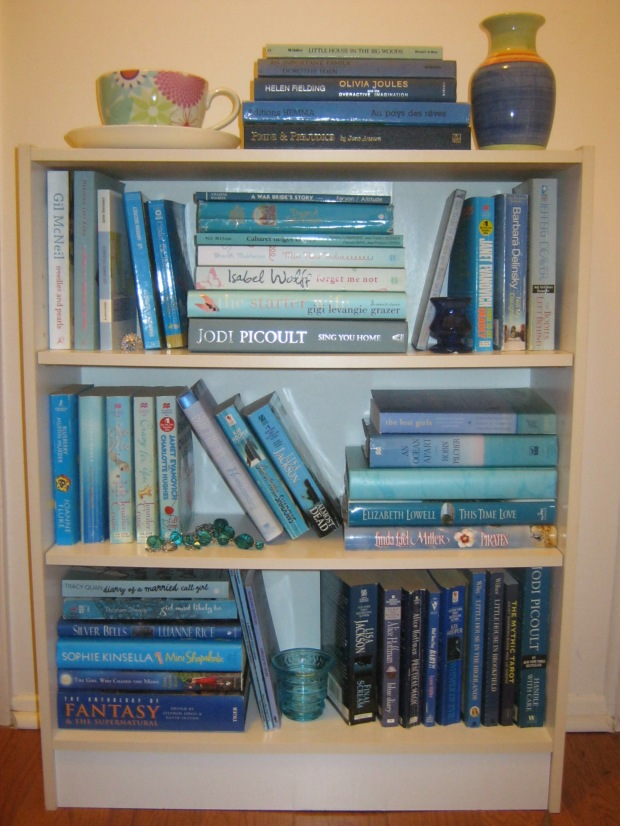 I think, amongst themselves, books probably have stereotypes based on colour, just like people do. This is what I think they think.

Blue books : They’re sad and mopey. They cry a lot.

Yellow books: They’re happy and have a positive attitude. They encourage the other books to get out and enjoy the sunshine on their pages.

Black books: They’re dark and creepy. They hide in the shadows and scare the other books, especially the pink ones.

Orange books: They’re hyperactive and drive the other books nuts with their crazy ideas and plans.

Red books: They’re always angry. Nobody knows why, because all the other books stay away from them.

White books: They’re very sweet, but also kind of boring. They like marshmallows.

Purple books: They’re very moody. The green books have suggested they take up yoga, but they get depressed if the corners of their pages get folded.

In an attempt to check if these stereotypes were based on fact or fiction, I asked my books. 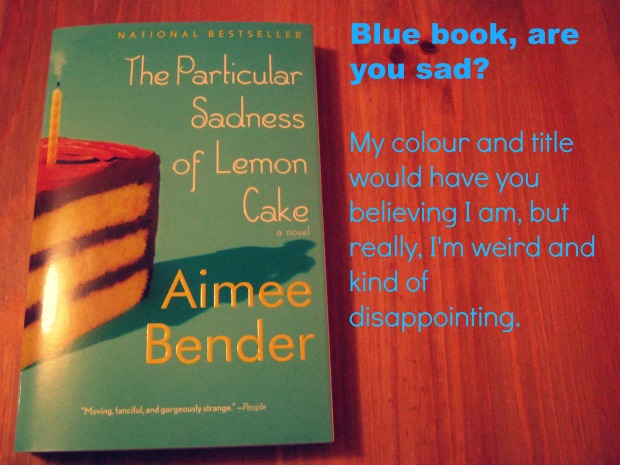 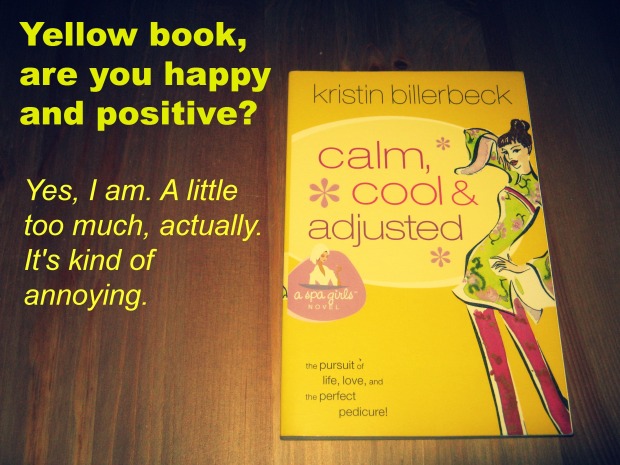 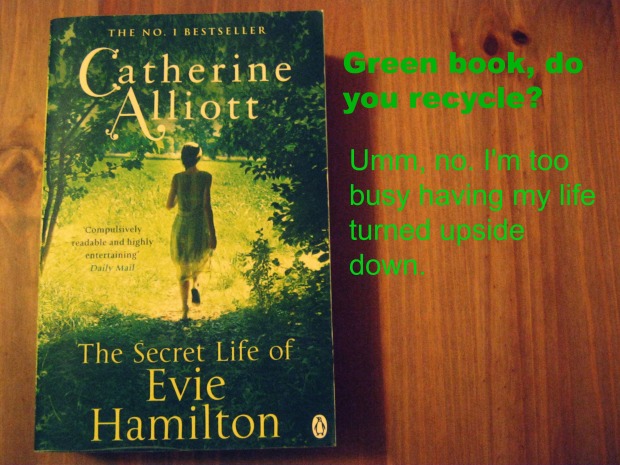 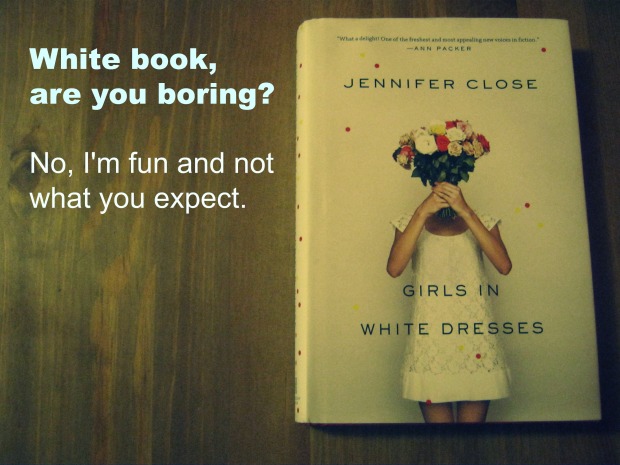 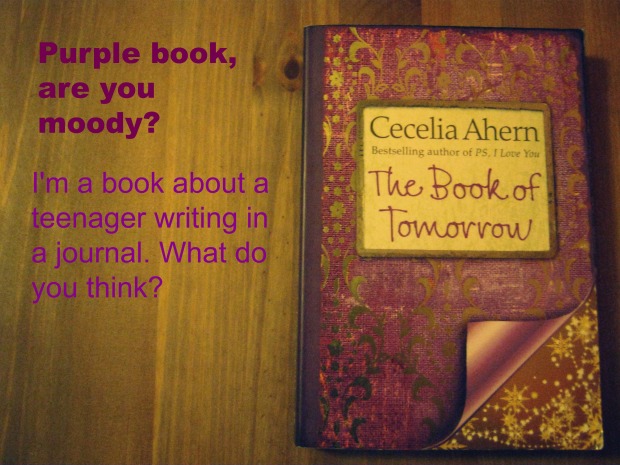 And there you have it, the books have spoken!

This post is a little different from what I normally write, but I was inspired by this week’s weekly writing challenge. The theme was “A splash of color”. Hope you enjoyed my splash!

This morning I participated in a 5k run for “Run for the cure” to help in the fight agains breast cancer. Ok, it was actually a 5k walk, not a run! I haven’t been running lately. Participating in a 30-day yoga challenge meant I had to chose, I couldn’t do it all. It was still lots of fun and we had a big team, called Pink Power. It started off cloudy and I was hoping the rain would hold off, but as soon as we started out, it started to drizzle. Not pouring or anything, so it could have been worse! It was like being at Niagara Falls, where there’s a mist everywhere. There were 10 000 people there, all wearing pink!

Now I’m off to the final class of my yoga challenge. Lots of people from the challenge are going to be there, so it’s going to be one big yoga party! I can’t wait!

Sadly, I was a little disappointed. Not with Havana, which was as vibrant, colourful and intriguing as I imagined it to be. It was like walking around a movie set, although I’m sure people who live there don’t feel like that! The city seemed to have a beat, a rhythm of it’s own.

No, I was disappointed because the tour had us spending time doing things like buying cigars (I didn’t want any), visiting a museum where you had to pay to take pictures and everything was in Spanish (obviously, but I didn’t understand it all) and having lunch in a restaurant for an hour and a half (it wasn’t even Cuban food). I wanted more.

However, I still saw plenty. On the way there, I saw so many horses, cows and goats tied to ropes by the highway, just chomping away on some roadside grass. There were chickens everywhere too! I wanted to shoo them off the road. I was worried they would turn into squashed chicken.

Also, I have never paid to pee so much in my entire life. By the washrooms, there were women waiting and you had to pay if you wanted toilet paper. The first time, it was a new experience. After that, it was just annoying!

There were many old cars in Havana. So many colours! I don’t know much about cars, so I can’t tell you what kind they were, but I saw a really fabulous pink car and also a bride and groom drive by in an amazing purple convertible.

I didn’t get a picture of the goats or the blissful couple on their wedding day, but I did get some great pictures of the city. 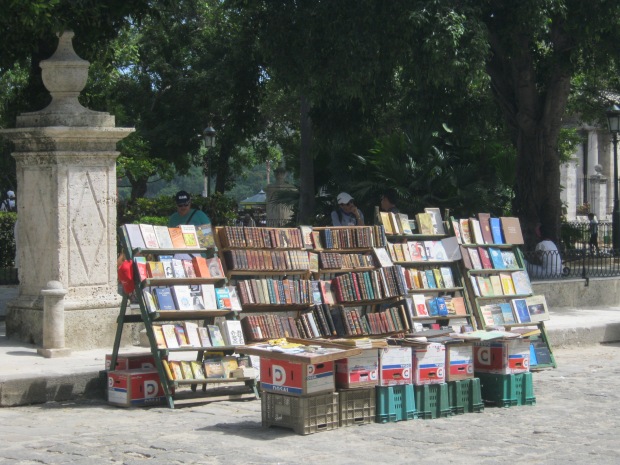 I might have been a little dissapointed by the tour, but it was great to actually see the city. It made a nice change from sitting on the beach trying to find the balance between coming home a little darker than when I left, and not getting a sunburn so bad it would feel like my skin shrunk.

Also, I had a Where in the World is Carmen San Diego computer game when I was a kid, and all I could think on the drive to Havana was “He went to Havana to eat a fried banana.” That was one of the clues in the game and the first thing that popped in my head when someone mentioned Havana. I’m happy to say I am now much more informed about Cuba’s capital!

I had the most amazing day today. I went hiking with my friend Suzanne around Pink Lake. Can you believe there’s actually a lake called Pink? Sadly, it is not really pink. It’s this pretty, green-blue colour. Apparently, it has an unusual colour because of a lack of oxygen in the water. And something about the different layers of water not mixing. Also some kind of super-algea or plancton, or something, that eats everything else. Whatever. It’s really pretty!

This lake is only 10 minutes away from my house and I had never been there. It looked pretty big, but it only took about 45 minutes to go around. And that’s with stopping to take plenty of pictures.

This is us just before we started our hike. 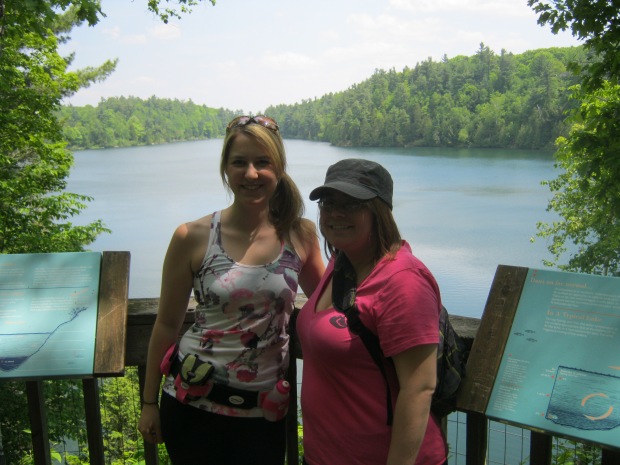 Apparently, it was very important that we stay on the path so we wouldn’t mess up the ecosystem even more and turn the lake purple or something. We did our best, but when we saw this platform, we just had to stop and do some yoga. That meant that the person taking the picture was off the path. Since it was in towards the trees and not the water, I’m thinking we’re ok. If not, it wasn’t us. 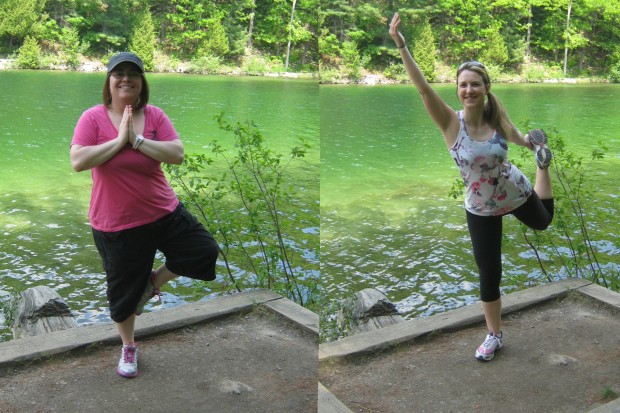 Most of the path was kind of like a boardwalk, with railings, to keep you from going too close to the glow in the dark fish, or the magic seaweed or whatever it is that makes the lake shimmer. We took advantage of these railings to pose for more pictures. 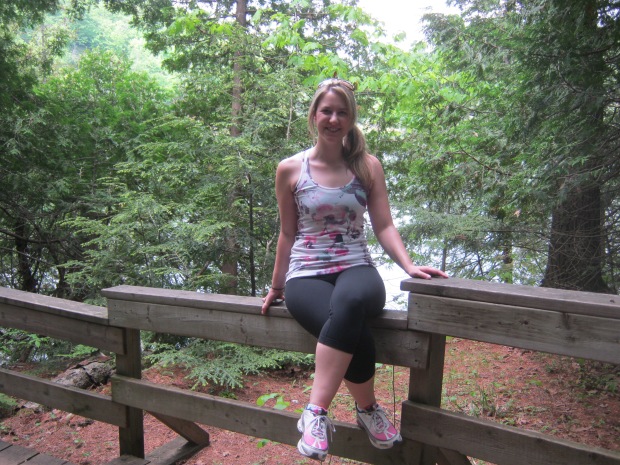 After we made our way around the lake, we found another trail that had really cool trees. Well, all regular trees and one awesome tree. It looked like it had a little fairy house inside. At first, I thought I could fit in the hole, but I think I would have gotten stuck and had what Suzanne called a “Pooh Bear moment”. 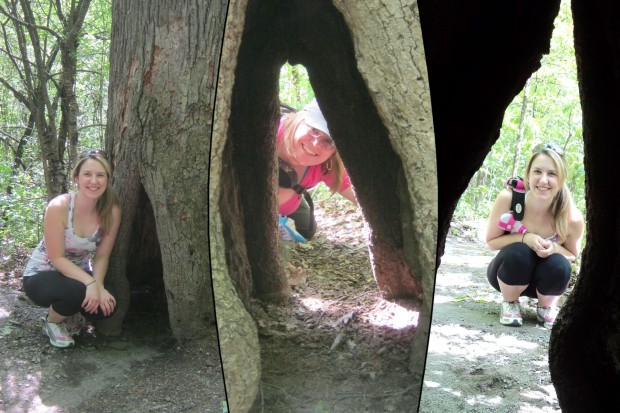 We also did some yoga on a log. I think it could really catch on as a new kind of yoga. It makes postures more challenging, what with the balancing and the swatting the bugs away, all while not falling off the logs and into the leaves. 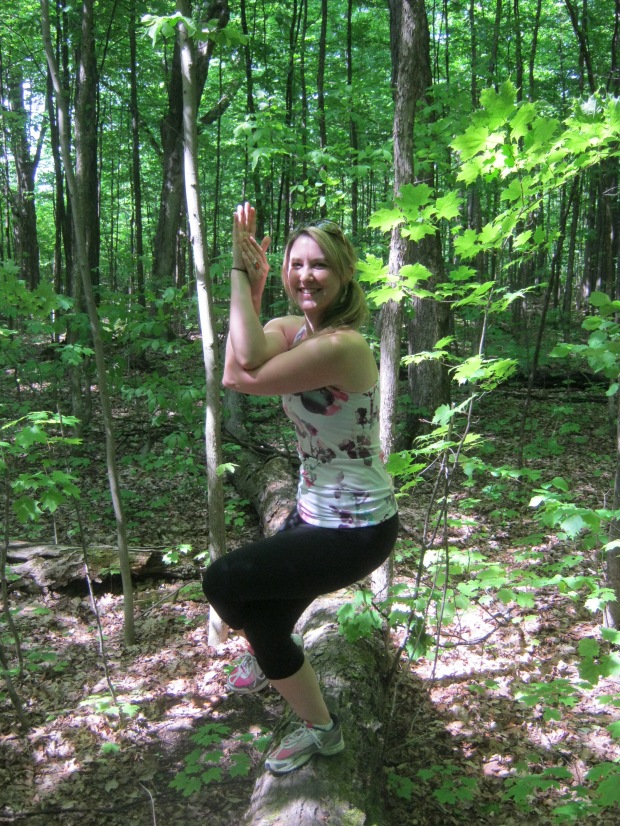 After all the yoga and the hiking and the posing for the pictures, we had a snack and a wardrobe change at home, then went to see an Imax movie about polar bears. The movie was great, if a little sad, what with us humans pretty much wrecking everything for the polar bears. There was a scary part too, when a really hungry male polar bear goes after two little cubs. I actually put my hands over my 3D glasses so I wouldn’t see, but the momma polar bear growled really loudly and that was that.

We then went out to dinner and had drinks on the patio. Nothing tastes more like summer than a beer outside.

After all that, we decided to go to Chapters because I wanted a particular book. I am doing a no-spending challenge, but I had decided to allow myself this book. However, they didn’t have it. I was tempted by a copy of the Bhagavad gita, but since that wasn’t the book I was looking for, I didn’t buy it. I have an Imax teacher pass and I had a gift certificate for the restaurant, so this whole wonderful day was free!

Today was such a perfect summer day, I think it means summer has officially started. Even if it really hasn’t, not officially. Happy summer!