Saturday morning, I rolled out of bed at 9:30 and debated whether or not I wanted to go to yoga. There was a festival going on in a part of the city called Westboro. I actually live across the river, but if I lived on the other side, it would be in Westboro. It’s got my favourite yoga studio, lots of great stores and boutiques, coffee shops, even a beach. When I walk around after a hot yoga class with my red face and yoga hair, nobody looks at me funny. It’s part of the norm over there.

One of my favourite teachers, Ichih, was teaching a class for lululemon at 10:30. After I finally got myself out the door, I had to drive there and find a parking spot, so when I got to the store, the class had just started. It was in the street, which was a new one for me, and there were mats layed out, which was good because in my rush I left mine in the car!

It was a great class. It was different being the one practicing while everyone else was walking around and looking on. Yoga is not really a spectator sport, but it was fun to see people’s reactions. Kids and dogs were the most interested in us.

About halfway into the class, the restaurant across the street had an Elvis impersonator start singing. That was another first. Yoga with the King. Ichih said something about hound dog, and at that moment, a dog started howling! Priceless! Sadly, I don’t have a picture of said dog. Or Elvis.

After class, Ichih and I walked around to see what Westfest had to offer. There was a lot going on. We stopped at an outdoor-type store so I could try on some vibrams. After some struggling with my crooked toes, I got my feet in! It felt a little strange, but I think I could get used to it. I didn’t buy a pair right away, I want to research it a little more.

While we were in the store, Ichih got a text from a friend saying her friends were playing drums and dancing and we should check it out. We could actually hear the drums from inside the store! We went out and watched the show. The girl dancing had incredible energy and she was teaching some kids African dance moves. 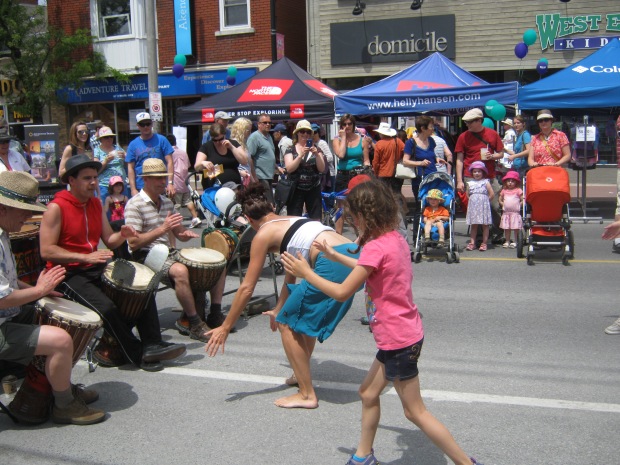 However, the kids left and she looked around for some new students. We were right next to her, so she pulled us in. I have rarely felt as uncoordinated as I did trying to learn those moves!

It was a lot of fun. It’s something I’ve always wanted to try so I’m happy I did, even if I felt like a duck trying to figure skate.

After the dancing, we got to see some amazing athletes perform on a trampoline. It was incredible.

Some of these girls have even been to the olympics. It was wonderful to watch them in action. 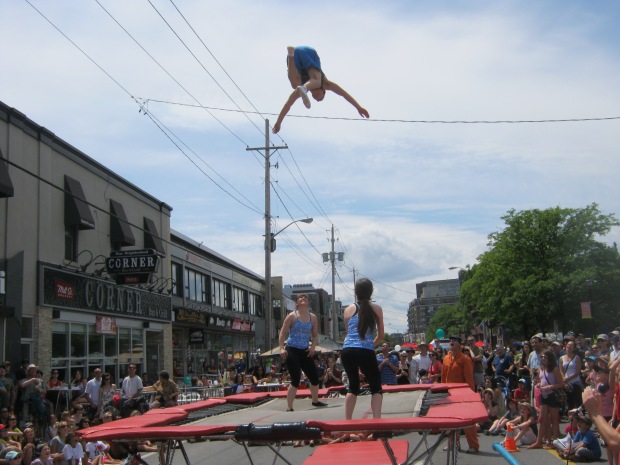 I also bought a really pretty necklace that Megan, my yoga teacher, made to help support the Global Seva challenge. The peacock feather is my favourite part.

When I woke up, I wasn’t even sure I wanted to go to Westfest at all. I’m so glad I went! That’s usually the way it is. When you’re not sure if you should go somewhere, go! You’ll have the best time! I got to do yoga, try something new, hang out with great people, meet some new people. It was really a fantastic Saturday!