Last night, after I got the time wrong for my yoga class, I was all “To yin or not to yin?” because the class was kind of late and I was worried I would fall asleep and maybe drool while everyone else got their yoga on. I decided to go, which, as it turns out, was an excellent idea. Not only was it a yin class, it was a yin by candlelight class. Doesn’t that sound romantic? Well, it’s not. But it was nice and relaxing.

I am learning things about myself already during this challenge. I don’t like dragon pose, I’ve made that clear. I don’t like his cousin, gecko pose, either. Stupid gecko. Let me explain.

Class started off nicely, with a wide-legged child’s pose and pigeon pose. I didn’t find pigeon quite as annoying as I did last time, maybe because I was expecting it. I hung out in rag doll for a while, then came the gecko. My inner voice was all: This is stupid. I don’t like this pose, it’s not doing anything for me. I don’t even want to be flexible anyways. Why am I even here? Do I even like yoga? Who comes to class at 9pm? I could be in bed by now, but nooooo, I had to come to yin. Stupid gecko.

Yin brings out a whole different side of me. If I were a superhero and my superhero name was Yogini Girl, or something equally awesome, I think my evil alter ego (or however that works with superheros) would be Whiny Girl. At least I only whine in my head. And on this blog. Lucky you!

Unlike pigeon pose the other day, where, as soon as I came out of it, I was fine, gecko wasn’t as easy to shake off. It took all of supported bridge and part of a twist before I felt human again. After the twist, we came into shoelace, which Mark, the teacher, warned us might be uncomfortable. I could have been all “Here we go again with the Whiny Girl attack”, but I actually like shoelace.

Here is a great picture, for all you visual people, like me. Ok, it’s not a great picture. It’s me doing shoelace pose in my pyjamas on my bed. Not the best place, it’s too smushy. I wanted a picture, so this is it. Also, it’s off-center. 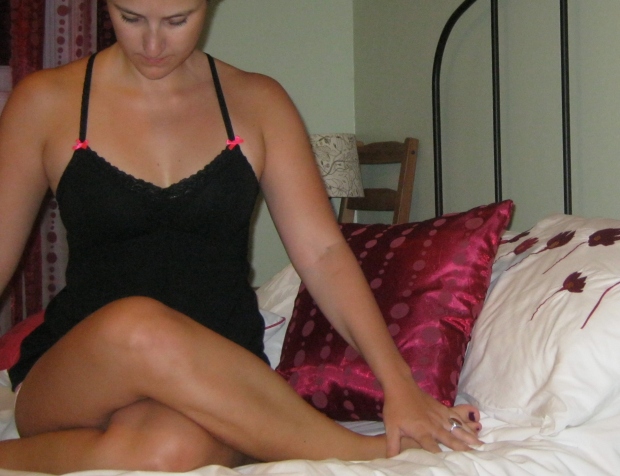 Today is day 5 and I went to another yin class with Ichih. I love Ichih and her classes, but she was in Whistler teaching at the Wanderlust festival, so I haven’t seen her in a while. I was so looking forward to this class, because even though I did yin last night, I knew I couldn’t do a power class today.

It started off easily enough: table pose, some forearm stretches, leg stretches. Just as I was thinking “ahhh…I can relax”. Ichih sets us up for… gecko pose! Are you kidding me? Seriously? Seriously? What’s with all the reptile poses all of a sudden? I could just feel Whiny Girl getting ready to stomp on the next gecko she saw. Stupid reptiles. Ichih said it was normal to feel grumpy. At least I was normal for once..

Does he look happy? No. That’s because he has to live his life in this pose.

Thankfully, apart from my gecko induced Whiny Girl attack, I felt like myself again after fish. Then we did a six movement yoga something. Despite my very vague description, it was wonderful.

After class, my friends Dominique, Jacynthe and I got to put our sticker on the board. There’s a big board with everyone who’s participating in the 30 day challenge’s name on it and we get a sticker for every class we attend. I thought it was a little silly at fist, but I love getting my sticker!

This is us pointing to our names on the board and Ichih pointing to herself because she’s such an awesome teacher!

I would like to end this post with a plea to Jen and Amber : Can you do something about the unnecessary reptlie poses please? It’s your studio, just ban it or something. Thanks!

Also, I would like to add that I wrote this post in two sittings. So my first rant about gecko pose was written before the next gecko pose even happened. I don’t know what this means, I just thought it was worth mentionning.

4 thoughts on “Yin by candlelight”