Last night was a full moon. I love full moons. I love the stories that go with them. They usually involve werewolves, but I remember my grandmother saying that my hair would grow more during a full moon. Scary stories, which I love/hate because I’m a big chicken, always happen during a full moon. I also think the pull of the moon has an effect on us. Maybe this is all the time, but when the moon is full, there’s no ignoring it. It’s like it’s saying “Hey! Remember me? I’m cool, I’m important. Don’t believe me? Ask the ocean.”

Other people must have realized how amazing and underappreciated the moon is, because last night, I went to a full moon yoga class. And this wasn’t just me doing yoga on my balcony trying not to fall over the under-regulation-height railing while trying to get a good look at the moon through the branches of the huge tree that will one day fall on said balcony and crush me if I happen to be on it. No, this was a class at the beach, where almost 500 other people were present.

I went with my mom and my sister and it was quite special. The girls from lululemon were hosting the event, so there was a lot of attention to detail. Candles and tiki torches lit up the area so people wouldn’t walk on other people’s mats, because that’s just bad manners. Also, it’s gross. The invite, and by invite I mean the facebook event, said to wear our whitest and brightest. I decided to go with my new hot pink pants. I love these pants, as they make me feel like a cross between Strawberry Shortcake, Super woman and the pink power ranger.

See the white spot above us? That’s the moon. It was a little cloudy, but only enough to make to moon look spooky, not hide it completely. 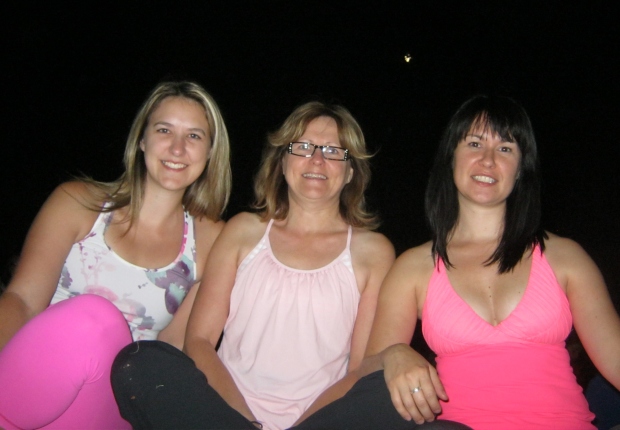 Amber, one of my favourite teachers, was leading the class, so I knew it would be awesome. I was hoping for some moon salutations because, well, do I really need to explain this to you? However, everyone was pretty close together, so moon salutes would have meant walking all over everyone else’s mat. (See above for why this is bad.) It was a new experience doing yoga in the dark. Not pitch-black, or I would have been scared, but nighttime-at-the-beach-in-the-city dark. 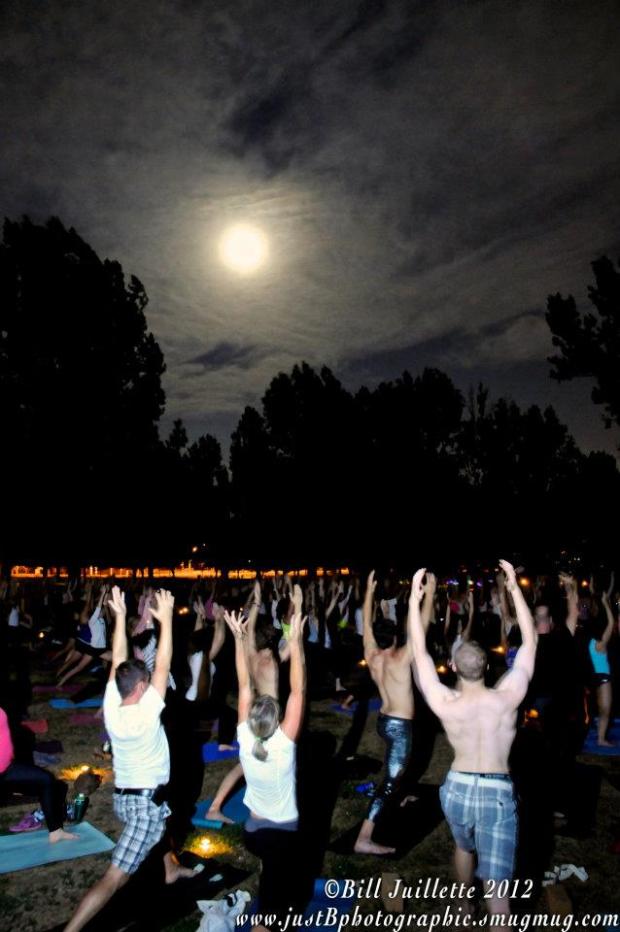 Some of my friends from work were there. Apparently. Maybe I didn’t see them because it was too dark. Maybe they didn’t go and just said they did, because, really, there’s no way to check. I can’t imagine why they would say they were going, and then not go, however. Unless they needed an alibi for something. Then they’ll be all “Ask her, she was there too.” And then I’ll either have to lie and say I saw them or say they were never there. Then someone will catch me in my lie, either the police or the people who caused my friends to need an alibi in the first place. I’ll have to run away and live in a tree somewhere and eat roots and berries to stay alive. That’s too bad, because I’m a picky eater and I don’t care much for roots and berries.

Wow. I didn’t realize how dangerous that was.

As you can tell by the beautiful, professional photos with the photographer’s name and website on them, I didn’t take these pictures myself. I tried, but mine were all dark and blurry and twilight-zone-y. These were on facebook and they’re way better than mine! You can check out the website to see more.

One thought on “Full moon yoga”