It’s almost the summer solstice. Isn’t that crazy? I feel like it was just the beginning of spring, and now, it’s summer! To celebrate the changing of the seasons, Ichih and Megan, two of the teachers at my favourite studio, decided to host a special class of 108 sun salutations. I’ve done this once before, for spring, and it’s not easy! 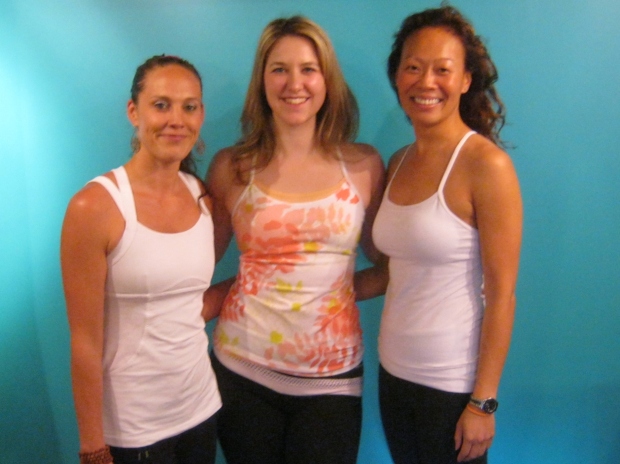 For the first 20 sun salutations, I was focused and worked on getting every pose right. I tried to get my back as flat as I could, didn’t wimp out on my chaturanga poses and opened my heart in upward dog. When we swan dived down, Megan would say “Pull heaven to earth”. I really liked the visual I got from that.

I’m looking in the mirror here, and yes, my back is quite flat!

Sun salutations 20 to 40 were so-so. The room wasn’t heated, but there was a class just before, so it was still pretty hot in there. My chaturangas were now being done on my knees and my upward dogs weren’t quite so high. It was great to have two teachers because I got twice the attention. I like having my postures adjusted. Ichih kind of guided my shoulders during one upward dog, and it made a huge difference.

I don’t remember much about salutations 40 to 60. Not that I blacked out or anything, but I was in the “moving meditation zone”. I was so focused on my breathing and the flow of the postures that I didn’t think too much. This rarely happens to me, so I’m pretty happy about it!

The last 28 sun salutations started off a little rough for me. I was tired and I started dragging my feet and doing the poses kind of halfway. Then I realized it would be a lot harder that way and I might as well suck it up. I had made it that far, there was no wimping out now. There was a great energy in the room. There was music, laughter and encouragement, all for a good cause!

At the very end, Megan said that someone out there mattered because of the work we had done. Yoga is such a personnal practice, I like the fact that my practice, my sweat, my sore arms, meant that someone’s life might be changed for the better. I could have just donated to the cause, but I wouldn’t have had the same personnal satisfaction.

After class, there was tea and little chocolate-peanut butter balls. Bliss!

On a side note, when I walked into the changing room before class, a girl said “Hey, you’re the bliss girl! I read your blog.” That just made my day! I felt like a celebrity.

On another side note, I am thrilled that yesterday’s attemps at an inversion have left not one, but two bruises on my shin! Why am I so happy to have bruises, you ask? Well, it’s kind of like outward proof of the work I do on the inside. It’s bad-ass.