Today, for day 16 of my 30 day yoga challenge, I went to a special “yoga and live music class”. I went to Adi Shesha yoga zone, a really great studio that I love!

Julie was going to come with me, of course, but then she felt sick so she decided not to come. I felt a little strange going to a yoga class by myself. Obviously, I’ve gone to plenty of classes alone, but for the last 15 days, there has always been someone there with me. I was so happy when I walked in and the first person I saw was Natalie. Yay! 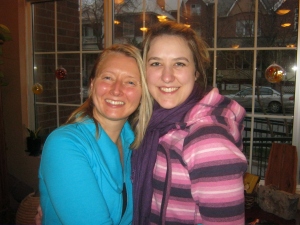 She wasn’t giving the class today though. The teacher was Basia. I was pretty excited to take a class with her, because she’s one of Julie’s favorite teachers. She was wonderful! When we took a picture, she said we had to do a yoga pose. It’s a good thing you can’t see my right foot, because a girl was actually holding it up!

There were two musicians who played different instruments during the class.  A guitar, a djembe and some other instruments I don’t know the names of. The guitar player also sang at one point, which was pretty cool. The music really followed the beat of the class. Or maybe we followed the music. Either way, it was really interesting. I like music during class, but it’s usually not live. I wanted to get a picture of the musicians, but I wasn’t quick enough.

At the end, during savasana, there was a strange sound, so I had to cheat and look. It looked like a really big white bowl with a stick or a wand of some kind being rubbed around inside. I know, great description. I’m not very musically inclined. I have no idea what it was. However, the sound it made kind of made me feel like a dog who hears one of those for-dogs-only-whistles and is told not to move. It made me fidget.

All in all, it was a very good class. I saw Natalie, got to meet a new teacher whose class I will definitely attend again and practice to the beat of some awesome music!

6 thoughts on “Yoga and live music”